All “Hail” Kale the King of Greens 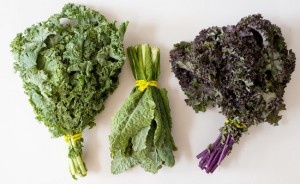 Although the green leafy vegetable kale may not have found its way into your kitchen yet, this super vegetable is not new.

Research suggests that kale originated likely in eastern Mediterranean or possibly Asia Minor. As the rising star in the vegetable superfood world, this leafy green is quite primitive having been gathered, eaten and enjoyed by tribes since long before recorded history.

Wanderers and traders brought kale to Europe approximately 600 BC where it enjoyed being “king” of vegetables until into the Middle Ages.

Kale is frost hardy making it simple to grow. People in Scotland planted “kale gardens” that they relied up to survive their harsh, long winters.

Making its way to the United States in the 17th century, kale was brought in my Europeans.

Officially considered a leafy dark green vegetable, kale also comes in vibrant bright whites and purple-pinks. Both ornamental kale, the pretty, colorful versions that are mostly used in flowerbeds and dinosaur kale (discovered and widely used in Italy during the 19th century) are more recent additions to the kale family.

Nutrient dense, kale packs more national punch in comparison to calories than nearly any other food around. Kale contains a rich amount of Omega 3’s giving it anti-inflammatory properties. Cruciferous vegetables including kale all offer anti-cancer properties and kale has been recognized as a rich source of Sulforaphane a potent compound exhibiting anticancer, anti-diabetic and antimicrobial properties. Kale can even help to keep your eyes healthy offering 76& of your daily recommended intake of beta carotene.

The official grow season for kale (when it is widely available) is from mid-winter to the beginning of spring when it offers a sweeter taste (kale is unique in that its flavor is actually enhanced by being exposed to a light frost). If you want maximum nutrition and taste from the kale you purchase, buy it in season and if possible choose organic kale from local growers. You’re greens will have been grown in better soil offering more flavor and nutrition minus the chemicals and pesticides.

Once you get your fresh kale home use it up as soon as possible and don’t wash the leaves until you’re ready to eat it otherwise it speeds up the wilting process, making it go bad. Be sure to remove thick stems (you can save them and use them in your homemade soups).

Although kale can be cooked numerous ways, steaming it offers the most nutritional benefit while chopping your kale up releases more sulforaphane one of kale’s secret health compounds.

There are 4 main types of kale:

Curly kale: Frilly green leaves, this kale is the most common kale that is found in grocery and super markets. Always opt for the smaller leaves when possible as these are tenderer than their larger counterparts.

Dinosaur: Known as Tuscan kale this kind is a favorite in Italian cuisine. Look for rugged, embossed texture to the leaves similar to dinosaur skin. This type of kale is perfect for braising and sautéing and is the most tender and mellow variety.

Ornamental: As the name implies, this type of kale if the pretties of all. Often called salad savory and popular in flower gardens it also makes a great garnish as long as it has not been spray with chemicals and pesticides of any kind. The flavor is best when small and tender.

Even if kale is not yet a regular on your table, likely some of its cousins have been for some time such as cauliflower, Brussel sprouts and broccoli. Along with kale they all belong to the same species of Brassica oleracea and can all trace their lineage back to ancient humans and their cultivation of wild cabbage.

Isn’t it time to introduce the “king” of all vegetables into your diet?

Take my 60 second test to find out how you fare on the weight loss resistance scale. If you’d like to reduce your resistance the first thing you need to know is how resistant you are right now! Most people don’t have the faintest clue where they stand, but by taking this test you’ll get an immediate answer.